By: Ted Dabrowski and John Klingner

J.B. Pritzker ran for governor on a generic proposal to implement a progressive income tax in Illinois. Despite calls from the media to release the details of his plan, he repeatedly refused to discuss any specifics.

In response to the lack of details from Pritzker, Wirepoints has calculated what a realistic progressive tax plan could look like. We took estimates of Pritzker’s promised spending plans from the media and combined it with Illinois’ income tax data. He won’t like what we found....

Pritzker’s dual campaign promises – to increase state spending by billions and at the same time protect Illinois middle-income workers from an income tax hike – are simply impossible to keep. The math says so.

No matter how you run the numbers, the progressive tax rates needed to fund Pritzker’s $10 billion-plus in new spending would be harmful. They’ll punish the wallets of both the middle class as well as the wealthy.

Residents were just hit with a 32 percent income tax increase a little over a year ago. They already pay some the highest state and local taxes in the county, including the nation’s highest property taxes. Pritzker’s promises would only add to that burden.

Pritzker wants to increase Illinois’ annual budget by at least 25 percent, spending billions more on everything from education to health care and from pensions to roads. Estimates for Pritzker’s new revenue demands range from Rich Miller’s $10.7 billion to the Illinois Policy Institute’s $18 billion.

And while he campaigns to spend billions more, Pritzker also promises not to hit middle- and working-class Illinoisans under his hoped-for progressive tax scheme (Illinois must amend its constitution to convert the state’s flat income tax structure to a progressive one). 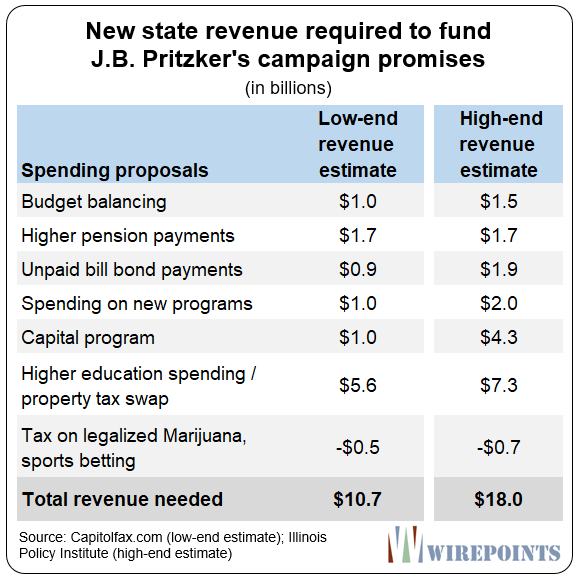 Pritzker has said: “A fair income tax will raise taxes on people like Bruce Rauner and me to support education and help solve the state’s budget problem, while reducing the burden on the middle class.”

But Pritzker can’t just tax wealthy residents like himself and Rauner to pay for all his promises. There are simply not enough wealthy people in Illinois to do so.

It would take marginal rates higher than California’s top rate of 13.3 percent – the highest in the nation – to get the revenues that Pritzker’s promises require. Not many wealthy Illinoisans will stick around to pay such exorbitant rates.

Wirepoints ran three separate progressive tax scenarios to see how Pritzker’s promises might work out. In all our calculations, we assumed Pritzker will require $10.7 billion in new taxes, the low-end estimate of his promised new spending. (See Appendix 1 for a full list of Wirepoints’ assumptions.)

The first scenario takes Pritzker’s promise at his word – that he’ll only hike taxes on the rich while protecting all other residents from a tax hike. That creates an extreme and improbable case of only two tax brackets: one for filers with millionaire incomes and one for everyone else. It’s a case that can be easily discarded as a nonstarter.

Wirepoints’ second scenario pushes higher tax rates further down the income ladder while still protecting the middle class – those with taxable incomes below $150,000 – from a tax hike. Unfortunately for Pritzker, the marginal rate on residents with incomes above $150,000 remains punitively high in this case. This scenario, too, can be easily discarded as unrealistic and unworkable.

While it’s obvious that Pritzker would never actually propose either of the two above structures, both illustrate the danger of campaign rhetoric that demands “the rich” pay for everything. Such promises can only go so far before they crash into financial reality.

To construct a plan that was more realistic, Wirepoints was forced to use even higher tax rates further down the income ladder. In our third tax scenario, all filers with incomes above $50,000 pay higher taxes. This shows the truth about Pritzker’s promises – that he can’t get all the revenue he wants without creating a progressive tax scheme that raises taxes on the middle class.

Scenario 1 – A tax hike on the “Rauner and Pritzker” rich

First of all, let’s get out of the way Pritzker’s promise to only raise taxes on the rich people “like Bruce Rauner” and himself. It’s clear from Illinois’ tax data (see Appendix 2) that Pritzker’s promise cannot be part of any real proposal. There simply aren’t enough wealthy Illinoisans.

If a progressive tax structure only raised taxes on the truly wealthy – just those with incomes of $1 million or more a year – then Illinois’ top tax income rate would have to reach an absurd 24.3 percent to generate Pritzker’s $10.7 billion in new revenues. That’s almost double California’s top rate of 13.3 percent. (See Appendix 5 for revenue breakdowns by income bracket.)

Obviously Pritzker would never propose something so extreme, but this scenario does serve to exemplify why targeting only Illinois’ wealthiest residents won’t work. Pritzker’s promise to tax only millionaires and billionaires like himself is easily dismissible. 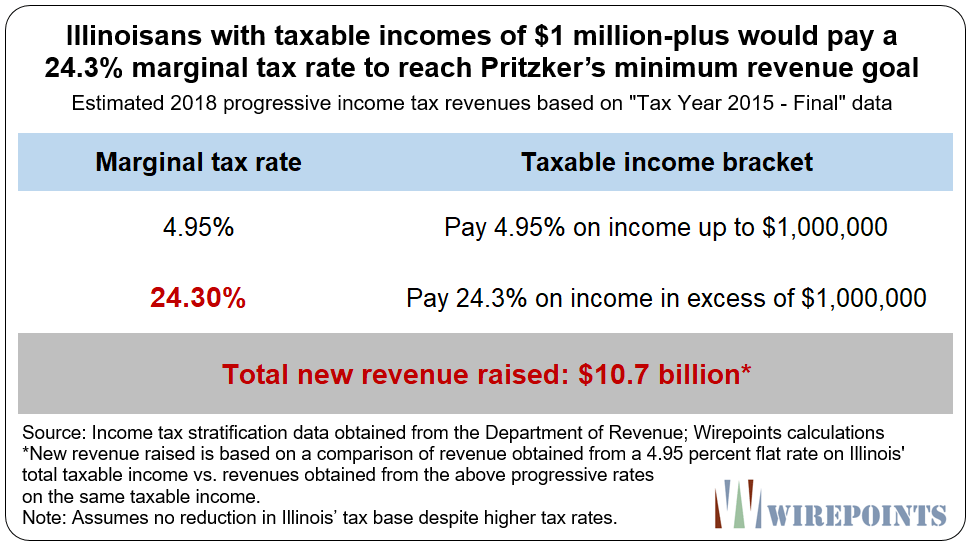 Even if the definition of “wealthy” is pushed far down the income ladder, Illinois’ income tax rates would still have to be punitively high to raise Pritzker’s required new revenue.

For example, take another simple two-tier progressive tax structure that treats all those earning more than $150,000 as “wealthy.”

The structure’s first bracket would continue to protect all filers with taxable income less than $150,000, keeping their taxes at the current 4.95 percent rate.

That means the remaining filers – those “wealthy” residents with taxable income above $150,000 – would all be forced to pay a marginal tax rate of 13.6 percent. That’s higher than California’s highest marginal rate of 13.3 percent.

The big difference: California’s 13.3 percent is only levied on income in excess of $1 million. Illinois would have to apply its 13.6 percent rate on single and joint filers making more than $150,000 to reach Pritzker’s revenue goals. 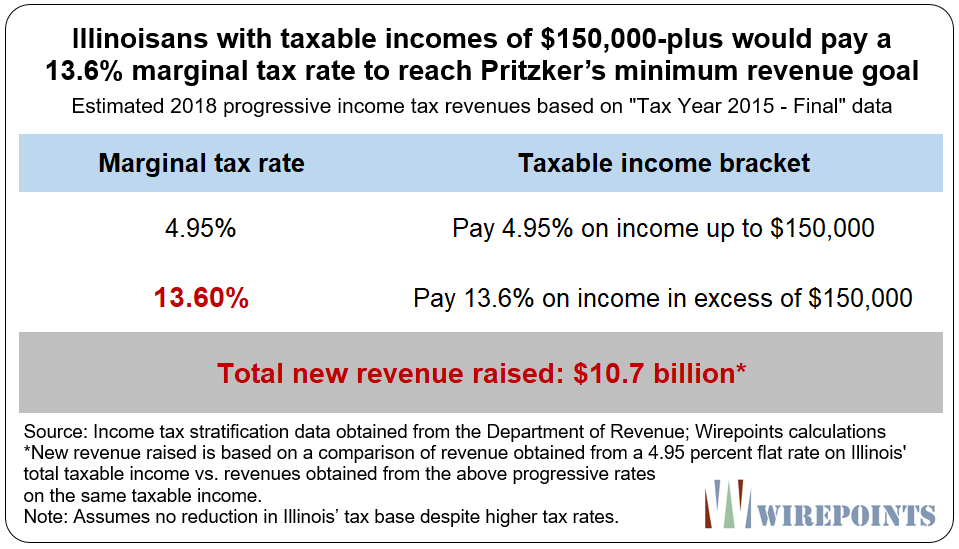 Scenario 3 – A tax hike on the middle class

Finally, let’s look at a scenario that shows the truth about Pritzker’s promises – that he can’t get all the revenues he wants without creating a scheme that hits everybody, including the middle class.

In this case, the progressive tax structure has six brackets to help make the tax hikes less extreme. The lowest bracket has a marginal rate of 4.95 percent, protecting all single and joint filers with taxable incomes below $50,000 from a tax increase. 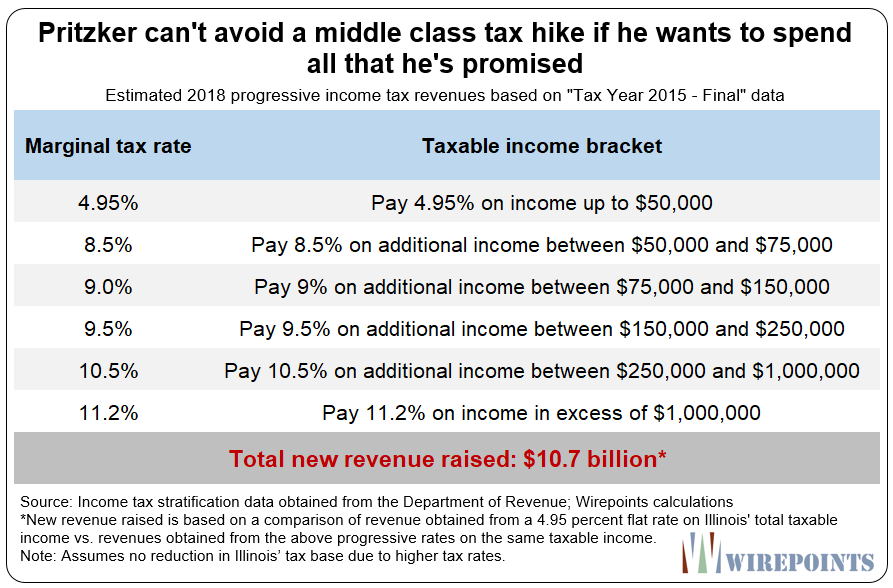 In practical terms, that means single and joint filers with more than $50,000 in taxable income will pay higher taxes.

For example, an Illinoisan with $75,000 in taxable income will pay nearly $900 more in taxes, up 24 percent compared to the current flat tax. That’s on top of the 32 percent income tax increase he or she got hit with just last year.

And for two married, career teachers earning a combined $138,000 in taxable income (the average Illinois teacher salary is nearly $71,000 according to COGFA), the progressive scheme would hike their taxes 50 percent, to $10,270 a year, from their current $6,831. 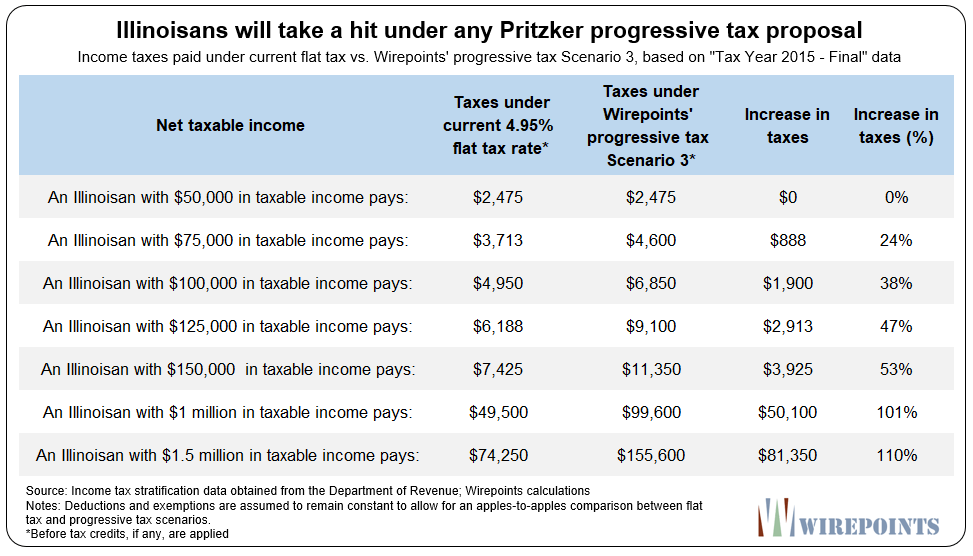 The above scenario is, of course, just one of an infinite number of potential progressive tax structures. One can play around with the brackets and the rates a lot. But the fundamental problem remains the same: Pritzker can’t realistically collect $10.7 billion in new revenues just by hitting the wealthy. There is no scenario where that works. He’d have to break his promise and impose higher taxes on the middle class to pay for all his promised spending.

The above scenarios are actually generous to Pritzker. They don’t take in account the reality that many wealthy and ordinary residents will leave rather than pay such high rates.

It would be especially devastating if Illinois’ limited number of “Rauner” and “Pritzker” wealth-level residents left. When they go, a large portion of Illinois’ tax base goes with them. New Jersey and Connecticut are perfect examples of what happens when states chase out their biggest taxpayers. Those states lost billions in taxable income when just a few uber-wealthy residents left.

In Illinois, approximately 600 filers make half of the $76 billion in taxable income earned by the “$1 million or more” bracket. (See Appendix 5 for the assumptions behind this calculation.)

A loss of just some of those top filers to other states would seriously dent Illinois’ tax base. For example, if just 20 percent of the net income in the “$1 million or more” bracket disappeared, Pritzker’s progressive tax plan would lose about $1 billion of what he needs to raise. That loss would require politicians to increase tax rates yet again to reach Pritzker’s desired revenues, creating a vicious cycle of more outmigration and higher taxes.

Focus on reforms, not a progressive tax

The reality is that Pritzker’s promises – to spend billions of additional dollars and to only tax the rich – simply won’t work. They’re a distraction that’s taken attention away from what’s really needed to fix Illinois: comprehensive spending reforms.

Illinois politicians should be showing how they’ll bring the cost of government in line with what Illinoisans can afford, not promising to grow their tax burdens further.

According to the latest, finalized data income tax data from the Illinois Department of Revenue, Illinois had over six million income tax returns filed in 2015 with a combined total net taxable income of $388 billion reported. Illinois’ flat income tax of 3.75 percent brought in $12.7 billion in net revenues that year.

The below brackets and net (taxable) income totals are used as the basis for calculating revenues under Wirepoints’ progressive tax scenarios.

Applying Illinois’ 2018 income rate of 4.95 percent to the latest, finalized data from the Illinois Department of Revenue (see Appendix 2) results in net tax revenues of $17.7 billion dollars. This amount serves as the comparison base for all other progressive tax revenue scenarios included in this piece. 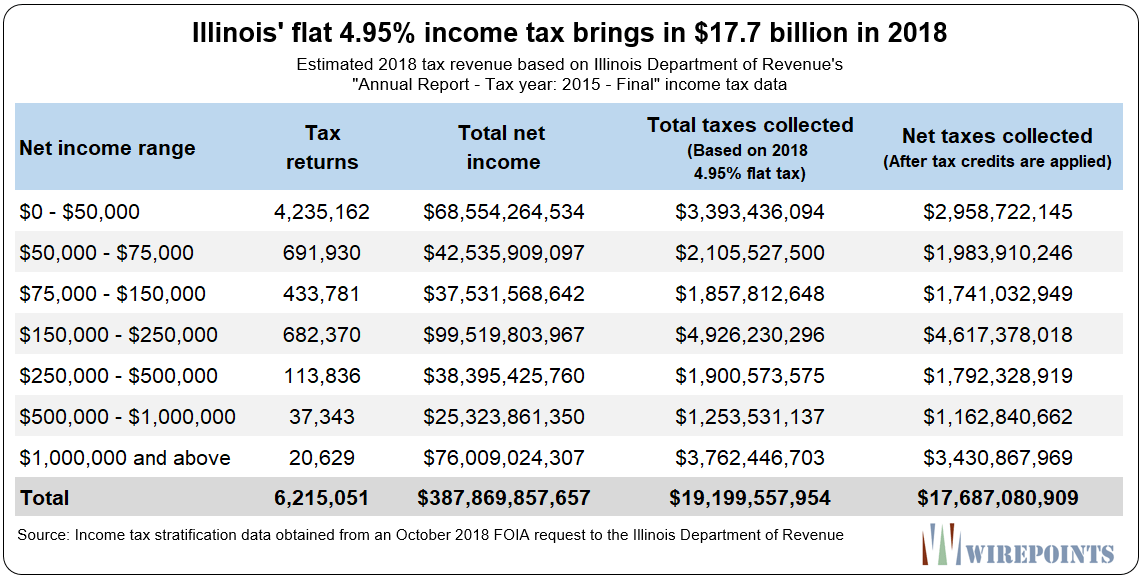 Below is a breakdown of the net income brackets and the tax revenues generated by each progressive tax scenario.

Appendix 5: Breakdown of incomes $1 million and above

The Illinois Department of Revenue did not provide Wirepoints with a detailed breakdown of those earning more than $1 million in its 2015 net taxable income table. 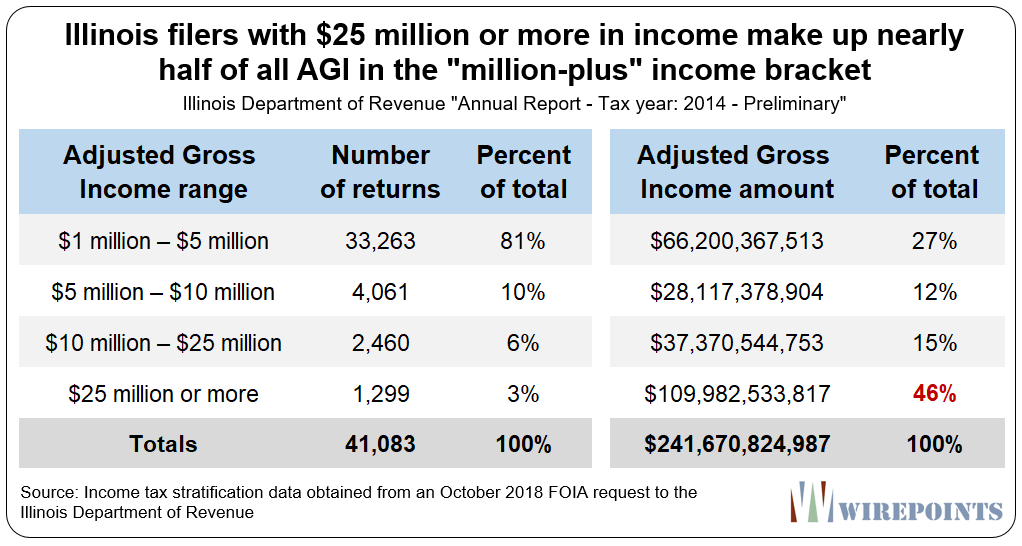 Wirepoints applied that 3 percent share of filers to Illinois’ 2015 tax data to arrive at an approximate 600 filers with net taxable incomes above $25 million (3 percent of the 20,629 filers in the 2015 “$1 million or more” net income bracket).