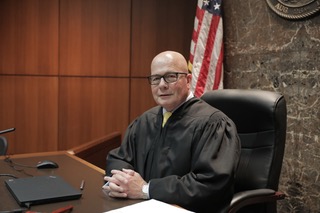 Judge McCluskey is an Associate Judge – 18th Judicial Circuit having been appointed in July 2018.  He previously was a founding member of Momkus McCluskey LLC. He concentrated his practice in the trial of commercial cases. Judge McCluskey practiced before all state and federal courts in Illinois. He is also admitted to the United States District Court for the Eastern District of Wisconsin.

Judge McCluskey received a Bachelor of Science degree in Accounting from Elmhurst College in 1976. He received his Juris Doctor degree from Northern Illinois University in 1979, and a Master of Laws from The John Marshall Law School in 1988. He has been licensed to practice law since 1979. He is a 1981 graduate of the Loyola University Trial Advocacy Program. He has written several articles for the DuPage County Bar and Kane County Bar Journals in the areas of tort and civil litigation. Judge McCluskey authored a chapter on Arbitration and Mediation for the Illinois Institute of Continuing Legal Education. He has given numerous presentations on various aspects of civil litigation for the DuPage County, Kane County and Illinois State Bar Associations. He is also a licensed Real Estate Broker.

Judge McCluskey began practicing law in 1979. He practiced as in-house counsel for CNA Insurance from 1979 to 1981. From 1981 through 1986, he practiced at Hubbard, Hubbard, O’Brien & Hall, a Chicago insurance defense firm. From 1986 through 1988, he was employed as an associate for Wylie Wheaton & Associates, a general practice firm in Wheaton, Illinois. He joined Clausen Miller, PC. a 150-attorney insurance defense firm based in Chicago in the Wheaton, Illinois office in 1988. Judge McCluskey joined Momkus McCluskey LLC as a partner in 1991. He has tried over 55 civil jury trials to verdict in Cook and the collar counties of Chicago. He has tried several jury cases in Federal Court in the Central and Northern Districts of Illinois. His trials include wrongful death, Structural Work Act, premises liability, insurance coverage, automobile, commercial, including contract, shareholder’s and partnership disputes, and probate cases. He also concentrated his practice in commercial, probate, shareholder’s disputes and real estate litigation.

Judge McCluskey is a member of the DuPage County NAACP. Judge McCluskey was appointed by the Illinois Supreme Court to the Committee of Professional Responsibility and still serves on that Committee today.